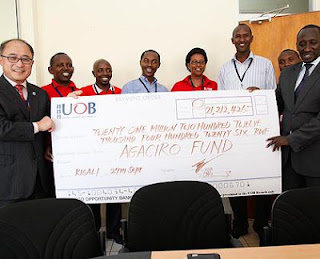 "Agaciro" means "dignity" in Kinyarwanda. Agaciro Development Fund (ADF) was initiated by Rwandans to help accelerate the development of Rwanda with their own fund.

It is also called "Sovereign Fund." It is because the Rwandan government promoted this fund to bridge the gap in development funding which resulted from either delayed or reduced payment of development/aid funds from major Western countries, such as the U.S., the U.K. and the Netherlands. Their actions were associated with an U.N. report that alleged Rwanda's involvement in supporting the M23 rebels fighting against the DR Congo government. The Rwandan government has flat denied all allegations on every account.

This initiative has motivated all Rwandans to stand up for the country's dignity, hence Agaciro, and participated in the fund-raising drive. The President Kagame has openly declared that it should be purely a voluntary participation from whoever desires to do so. However, many feel that they have to. This sends a signal that many are doing it in fear or reluctantly while others may be eager to do it. It is reported that government officials or staff have pledged or donated up to 100% of their one month salary to be paid over 12 months.

At any rate, this Agaciro Development Fund drive has raised $30 million worth of pledges in just two months. That amount happens to be the same as the amount that has been a shortfall in Rwandan government's development funding needs. Coincidence? Could be. Calculated maneuver? Could be also.

At any rate, UOB and all UOB staff also participated in the fund-raising campaign after a lengthy debate among representatives of the staff. In total, UOB and UOB staff, including myself as a friend of Rwanda, have donated RWF21.1 million or approximately $35,000 in cash. The bank has decided to make the lump sum payment on behalf of the staff to be collected over the next 12 months.

Personally, I think it is a good campaign to mobilize savings among Rwandans. It is an effort for self sufficiency. There have been other cases in different countries. If this drive continues, however, without genuine desire collectively expressed in consensus among Rwandans, it would become another form of tax for the Rwandan citizens and businesses. It may also worsen the otherwise wonderful leader's tarnished image as a dictator although I personally think he is a benevolent strong leader. We will see. - Jeffrey