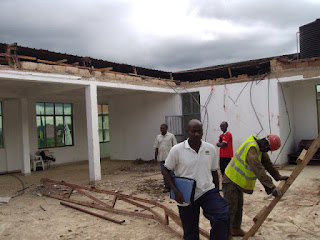 In May, Rwamagana Branch roof collapsed because of heavy rains. I was traveling so I did not see it first hand, but it looked like a site after a bombing. The entire roof collapsed and the floor was exposed to the sky. You will agree based on the photo to the left.

Our leadership team acted promptly and properly. They visited the site, talked to the local authority, contacted the landlord overseas and hired a contractor for immediate repair. I was so proud of the team.

Our branch operation was not affected because there was an empty space upstairs. We were supposed to use the space but we delayed the occupancy because of other priorities. It turned out to be a blessing to delay the occupancy. Praise the Lord! 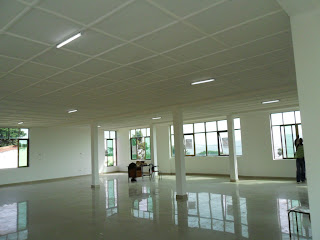 Now, it has been fixed and it looks better than before. (Right)

We praised God who has protected us from the incident. We plan to relocate the Rwamagana EBU from the ground floor and establish the bank's DR (disaster recovery) site upstairs of the building. - Jeffrey
Posted by jlee80111 at 5:39 PM