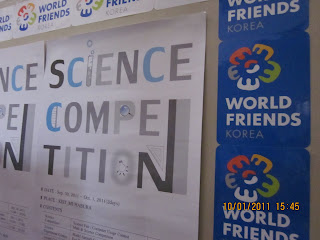 On Saturday, October 1, five KOICA volunteers jointly held the first Science Competition in Rwanda. The competition was held among high schools (secondary schools) for team competition and also for individual competiton. The areas of competition were: 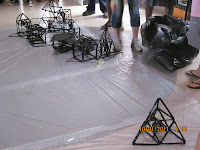 1. Dropping eggs from the highest p
oint without breaking them.
[some of the samples]
2. Making bridges with chopsticks which can hold the heaviest weight
[photos of a bridge holding a weight of 20 kg, second right below]
3. Flying gliders longest 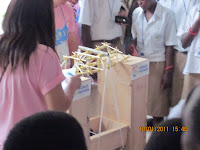 4. Shooting water longest
The participants also competed on solving mathematical problems.
The winners received NetBook computers and they all were excited about the significant and valuable gifts that they received.
It was very well organized, well attended and well executed. Kudos to young KOICA volunteers!
It is their hope that this tradition will be continued to spark the interest of young students in science that will be the basis for this country's dream to be the East Africa's ICT hub. - Jeffrey
Posted by jlee80111 at 1:32 PM

Good writing...keep posting dear friend
This discussion unexpectedly takes my attention to join inside. Well, after I
read all of them, it gives me new idea for my blog . thanks