In Rwanda, the gender equality is real. For example, more than 50% of the Rwandan Senators are women. The chief justice is a woman. Approximately 40% of the state ministers are women, including the ministers of ag 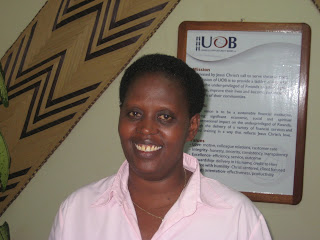 riculture, of trade, of foreign affairs. Indeed women are empowered in Rwanda.
At UOB, we are also empowering women in several ways. To name a couple, more than 90% of its clients are women and 55% of its staff are women.
Recently, Alice Gasatura, Director of Credit Support was on a 3-week tour to the U.S. as part of the fund-raising team of Opportunity International US. She shared her life story as well as the client transformation stories. She visited Washington D.C., Chicago, Seattle, Los Angeles, Dallas, Atlanta etc. She is one of the most senior women staff at UOB and she was the first female staff who traveled to the U.S. as an embassador of UOB. 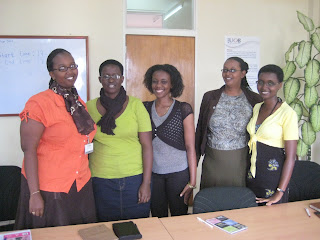 Also, we have sent five middle management female staff [Alida, Oddette, Pelagie, Mary and Marie from left to right] to a month-long training in Nairobi, Kenya. This training was sponsored by Goldman Sachs in its campaign to develop 10,000 women entrepreneurs in developing countries. During their training period, they learned about 23 managment topics on microfinance.
They will be deployed, along with other staff who have been trained else where, to share their knowledge with their colleagues through UOB Academy to be established in 2011. I hope to see more women empowered not only at UOB but also among clients to carry out more important tasks going forward. - Jeffrey
Posted by jlee80111 at 6:17 AM

Praise God for UOB! So excited to hear about how women are being empowered at the management level of the bank. Keep up the great work.