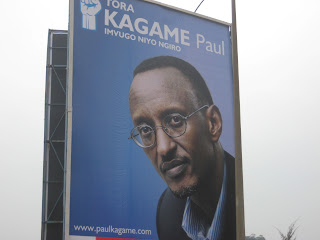 Rwanda has been gaining more and more interest from the international community. It is primarily because of the reformation that is taking place in Rwanda, "the heart of Africa" or "the land of thousand hills." Behind all this reformation is President Paul Kagame, who is now running for re-election as President for another seven (7) years. The election will be held on August 9th.
Reformation is taking place in all sectors: politics, women's rights, education, finance, ICT, agriculture, trade, mining, tourism, business environment, infrastructure, healthcare etc.
Politics: Politically, it is stable and secure. Despite some recent international negative press about Rwanda, we, residents in Rwanda do not feel the threat at all. Rwandan government maintains the policy of "zero tolerance for corruption." Many countries also say that too, but most fail to implement. Rwanda is actually doing it. Even President's aides and relatives go to jail once they are found to be guilty. No investors are experiencing any solicitation for bribe. No drivers are expeiriencing petty money solicitation on the road from the police, unlike in Rwanda's neighboring countries.
Women's Rights: In Rwanda's parliament, more than 50% of its members are women, the highest in the world.
Education: Rwanda has now 9 years of free education. The President is now promising a 12-year free education in the next term, if he is re-elected. Nobody questions his re-election.
Financial: Rwanda is reforming the overall financial sector, from banking to equity market to microfinance to insurance to a credit reference bureau. Still long way to go, but Rwanda is definitely on the move.
ICT: Rwanda was recently reported to have the third fastest internet connectivity in Africa. It is amazing. Moreover, it is now laying fiber optic cables throughout the country and it will soon be connected to the sea cable. No doubt, Rwanda will be the fastest in Africa, then. Currently, Rwanda has one computer per child program going on. In a couple of decades, these children will be the driving forces behind the country's ICT development.
Agriculture: Rwanda was the only country that satisfies all the requirements in 2009 under the Comprehensive African Agricultureal Development Program (CAADP) that has 25 African countries now. Rwanda's agricultural production exceeded the consumption for the first time in 2009. African countries are using the term "green revolution" in describing what is happening in Rwanda. It is now on the second phase of Strategic Plan for Agriculture Transformation in which Rwanda is investing $850 million.
Business Frienliness: Rwanda is ranked 67th in the World Bank's Doing Business Ranking. It was a jump from 143rd in the previous year and in the world history no other country has ever achieved this huge jump in one year. Thus, the World Bank named Rwanda "the most reforming country" in the world. No other African country has ever had this honor. Amazing.
Rwanda is reforming... big time. And unbelievably fast.
Tourism and Public Works: Rwanda is one of three countries that still have mountain gorillas and is attracting tourists for its mountain gorilla trekking and for its rain forest, Nyunguwe National Park and Akagera National Park.... Rwanda has six public construction projects to improve the infrastructure: Methane Gas Extraction Project (energy), Kigali Convention Center (business), Bugesera International Airport (transportation), Kigali Free Trade Zone (trade), International Railway Project --Tanzania to Burundi (transportaton) and Oil Pipe Project from Uganda and Kenya (energy). They all are happening at the same time.
Kigali has a city master plan in which the city will be able to house up to 4 million pepole. It has several centers of excellence for education, science, industry and finance. For example, one of Education Centers of Excellence will house the Carnegie Mellon graduate school for engineering...
Kigali will have two international hotel chain flags: Marriott and Hilton. (for the first time in East Africa)
Health: Rwanda already has a national health insurance (Mutuelle) that currenlty covers 85% of the population at $2-3 per year and the government plans to increase it to 100%. Of course, the coverage is poor and the waiting time is long. But it has a national health care service at this early stage of its economic development. This service is provided through 480 health clinics, a significant network compared to only 50 in its neighboring Burundi, for example.
The list goes on and on...
Because of this tremendous transformation that is taking place, Rwanda is attracting growing interest from the international community.
Nike Foundation, the fifth largest foundation in the world, brought all the senior management team to star the "Girl Hub" in Rwanda for the first time in Africa...
Caterpillar Foundation is now showing interest in providing support for the agricultural sector.
Gates/Master Card Foundation has granted a funding to provide agricultural finance and rural savings for five African countries through Opportunity International and Rwanda is one of them to be implemented through UOB.
Just to name a few...
EU, AU, IFAD, World Bank, DFID (UK), USAID, China, Japan and many other countries are committing resources to assist Rwanda in its development.
So far so wonderful. And thank God for what He is doing in this tiny inland country in Africa.
It is my prayer that this momentum will continue to be built up for the next seven years and beyond President Kagame, to definitely turn into a great success story that other African countries can turn to and learn from. In His story, it is about time for Africa to have such a model country. - Jeffrey
Posted by jlee80111 at 9:37 AM