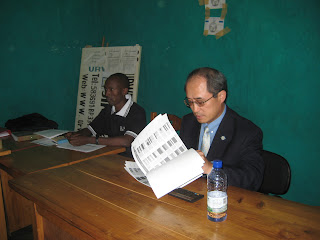 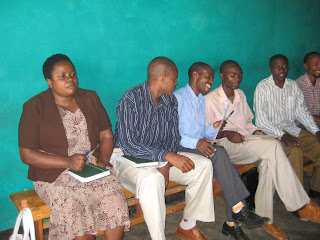 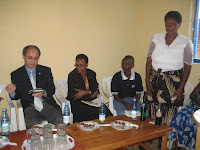 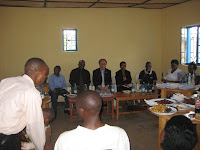 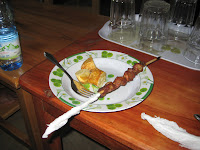 On Friday, August 6th, 2010, I visited the Huye/Nyanza EBU located in the southern part of Rwanda. Huye is the district but also is the second largest city in Rwanda. Huye is the home for National University of Rwanda, the largest national university, thus being called the Rwanda's intellectual capital. It also has the head office for National Museums of Rwanda.
UOB's Nyanza/Huye EBU (Entrepreneurial Business Unit) consists of four offices in Huye, Nyanza, Ntyazo and Nyamagabe. It covers the largest geographical area. It had been struggling in 2009 with poor performance and rising PAR. Thus, we had to change the leadership at the EBU early this year and I wanted to empower the new leadership in front of the staff. The new EBU leader is Olivier who has been transferred from Musanze. A total of 9 people report to him and he in turn reports to Joyce, Director and Bugesera EBU Leader. Joyce is a specialist in a turnaround situation. I trust that they will together turn around the Nyanza/Huye EBU.
Also, I visited a trust group, called Dutezanyimbere. It was started in September 2008 and was about to begin its fifth cycle with 21 members. Its membership has fluctuated widely from 38 in the first cycle to 34, 32 and 39 in its subsequent cycles. In the last cycle, the group had some serious problems among some members and they had to regroup them by dropping many defaulting members and adding new members, like many other groups that are sufferring due to the slow economy.
Some members shared their transformation stories, including Domithele, Vice President of the group. She joined the group from the inception with the primary purpose of helping their grand children go to their secondary schools. She has nine children and six grand children. Her micro business of selling grocery items has grown faster than expected and she feels confident that she will be able to help her grand children pay for their secondary school fees. She was grateful to UOB and we praised the Lord who was gracious to her.
Other members also shared testimony. One young lady testified that with the micro credit, she was able to buy a cow to feed her young baby as well as to use the cow manure as fertilizer. Another young man completed his third cycle and is building up his small retail business with the micro credit. He was hoping to get a loan to buy a motorcycle for a motor taxi business. We explained about our plan to roll out motorcycle loans soon and agricultural finance later this year. They welcomed our plan and invited us back in four months when they would expect to perform better than last cycle. We also shared our plan to roll out micro insurance and micro leasing.
We shared goat brochette, Rwandan's popular food, and fried bananas over soft drinks. It was a simple meal, but it served as our lunch and probably their lunch as well. It cost us approximately $37 in total to feed us all, 27. - Jeffrey
Posted by jlee80111 at 5:52 PM