Many people are curious about the real impact that microfinance makes on the poor. Thus, many attempts have been made to assess this impact. Economically, there have been several reliable impact assessments; however, this impact assessment has become fuzzy and unclear in the social and spiritual aspects. 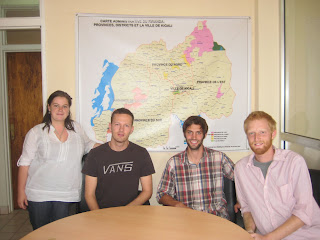 UOB has been working with Association of Christian Economists (ACE) in the U.S. to make an audacious effort to asses all three (economic, social and spiritual) aspects of the impact that microfinance brings to the poor. In April, two economists (Paul from Univeristy of Minnesota, Bruce from University of San Francisco) came to do the preliminary research and design. In June, another economist (Julie from Tuffs University) came to UOB with four graduate students from University of San Franciso, students under Professor Bruce, to conduct the initial research.


These research students have surveyed for the past eight (8) weeks in three areas: Bugesera, amagana and Muhanga. They interviewedng approximately 330 households a half of which are UOB clients and the balance non-UOB clients, mostly non-borrowers of micro credit. Non-UOB clients were selected randomly to establish the basis for comparison. This process is called "randomized control diary." These research students have just completed their data collection from the field and will now conduct thorough analysis back in the states for the next six months.

Meanwhile, three economists (Paul, Bruce and Julie) have been approved for a concept note on developing a pragmatic tool (a simple 20-question survey sheet) that may be used by the lending staff on an on-going basis to monitor and assess the microfinance's impact for an extensive period of time. They plan to submit the final proposal to secure a funding to develop the pragmatic tool.

I pray that in the end we will be able to develop a pragmatic tool to conduct on-going impact assessment so that we make sure we invest the resources in the right areas in the way that will maximize the economic, social and spiritual impact on the poor. - Jeffrey
Posted by jlee80111 at 5:49 AM