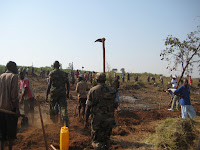 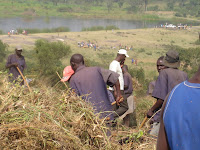 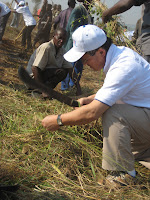 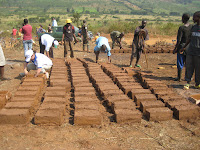 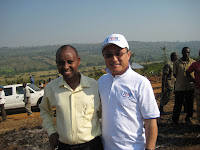 [Pictures from top left to righ: Perpetrators now pardoned and in community service; Machette used for the genocide before, but now for the constructive purpose; Military personnel working together with civilians; Bricks being made and dried; With the Bugesera Mayor; and With all UOB employees who participated in the Umuganda]

The last Saturday is Umuganda in Rwanda. It means "community work." All people of Rwandan are supposed to participate in community work, whatever it may be. It could be street cleaning, grass cutting, digging wells, building a community center, etc. The police may stop the vehicles after 7:30AM and keep you parked by the road until after noon. They are somewhat lenient towards the Muzungus, or foreigners.

Today was the Umuganda. 20 plus employees of UOB participated in the Umuganda in a special way. We drove down to Bugesera District, 45 minutes south of Kigali, and parcipated in the brick making community work. "Brick making?", you may wonder.
Yes, we helped make dirt bricks using dirt, dry grass pieces and water. Almost 400 people worked together and we made approximately 1,700 bricks. These bricks will be used to build houses for the orphans and widows who survived the genocide. The 400 people who worked there included soldiers, policemen, farmers, volunteers like us and genocide perpetrators who have been pardoned. These people were wearing dark navy blue uniforms that were well noticeable.
It is the process of reintegrating them into the community. They are those who killed the families and neighbors of the village people, and they know it. It is not an easy process, but it is happening. Initially, they got mad and some were throwing rocks at them, the Mayor explained. But, gradually their anger diminished and they have not only forgiven them but also made friends with those who have sincerely reprented. It is a beautiful story of reconciliation and restoration of the broken relationship. It is the gospel.
I did some digging and chopping the dry grasses. I had a mixed feeling when I was chopping the dry grasses with a machette. It was the one that the perpetrators used in slaughtering the Tutshis and moderate Hutus. Hmmm... I groaned.
I had a chance to converse with the Mayor for an hour. He strongly asserted that the restoration process was definitely in progress and he was very hopeful. I nodded and agreed. And I prayed. "Lord, may your love be overflowing and evident in the hearts of these people for great forgiveness, healing and reconciliation.." - Jeffrey
Posted by jlee80111 at 4:41 PM

We heard that you got a little ill over the week, and we hope that you are feeling better. Please know that the LCC Habaneros are praying for you speedy recover and health.

Thank you, Habaneros. Your comments were timely encouragement. I am feeling better. Cummulative fatigue and lack of sleep may have caused the illness. Your prayer support is greatly appreciated. Blessings! JJL

You forgot that you send your daughter away to a young man and became a 'Hansen'. I think that is the reason. You don't even know it....ha..ha..ha...