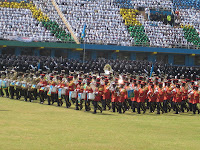 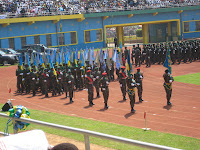 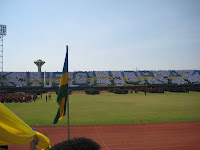 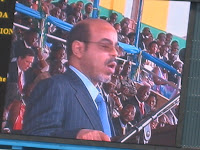 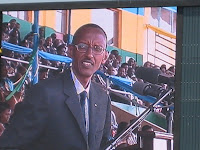 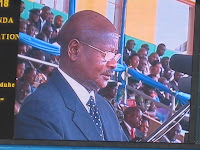 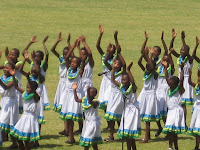 [From top to bottom, left to right: Marching band and body section; "Kwibohora"; Well trained solidiers marching; Ethiopian Prime Minister Zenawi; Ugandan President Museveni; Rwandan President Kagame; Children singing a song of unity]
In Rwanda, July 1st is the Independence Day. It is the day to commemorate the independence from the Belgian colony in 1962. It must have been a meaningful day then, but not so much these days. Many people work and many business are open for business.
But not so on the day of July 4th. All businesses are closed. It is the Liberation Day.
Yeap! It is the Fourth of July, America!
This is the day that Rwandans commemorate the liberation from the genocide.
It is the official day when the RFP (Rwandan Patriotic Front) pushed the Hutu extremists or Interhwame out of Rwanda, mostly into the DR Congo's jungle and declared the victory since the genocide broke out on April 7th, 1994. Rwanda was liberated from the genocide in about 89 days and about one million lives literally slaughtered.
Today, I attended the 15th Independence Day Ceremony along with tens of thousands of Rwandans and distinguished guests. At this ceremony, Rwandan President Paul Kagame conferred the country's extreme honor medals (URUTI) to the current President of Uganda Museveni and the current Prime Minister of Ethiopia Zenawi for their contribution to the process of Rwanda's liberation in 1994. Tanzania's late president Nyerere's wife was also awarded a plaque of appreciation for the former president's contribution.
The venue was Amahoro Stadium. Amahoro means "peace" in Kinyarwanda. It symbolizes the strong desire of the people of Rwanda in their country. Peace... is a noble word. But, almost all peace treaties made in human history have been broken. There is no genuine peace in people's mind without knowing the Prince of Peace: Jesus Christ.
On the field, there were companies of Rwandan Army and the Rwandan National Policy. Their marching demonstration was impressive. Well ordered and discplined. They even showcased their combat helicopter unit flying over the stadium. The marching band's performance was also impeccable and I felt like I was watching a well trained Korean or American military showcase. Rwandan Army is known to be one the best at least in the central Africa.
All the ceremony program was well organized and conducted in a very professional manner. All people were peaceful and orderly. On the opposite section from the main covered area, people wearing Rwanda' national colored shirts displayed "Kwibohora." It means "Liberation."
One government official said to me that Rwanda was liberated from the genocide 15 years ago, but it was only the beginning of the total liberation process. He said, "Rwanda needs to be further liberated from the HIV/AIDs, chronic poverty, corruption, dependence on foreign aid etc." He looked pretty determined. He is right. I find great hope in Rwandans like him and many others who aim high for higher standard of living and higher ethical values.
The three-hour long program ended with children singing a song of unity. They all are younger than 15 years of age. They all must have been born after the genocide. They are the generation of "Rwandan", not of Hutu or Tutsi. One little child proclaimed, "Dignity is our Strength." (Ijabo Riduhe Ijambo.) Rwandan are indeed a people of dignity.
I was so glad that I attended the ceremony although it was not fun sitting in the sun with the suit on.
Umunsi Mwiza wo Kwibohora! (Happy Liberation Day!) - Jeffrey
Posted by jlee80111 at 7:18 AM