A thought on the Market Day... 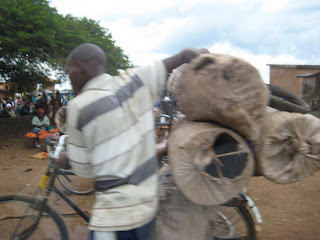 Well... back in Korea... when I was young, I remember the market day. It was a time when all merchants brought their items for sale from all over the surrounding places. The market day was held every three days or five days, and they were called as such: "Three-day Market" or "Five-day Market." On the market day, people gathered to look around, to shop, to eat, to play, to meet people or just to watch people.
In the U.S., there are farmers markets. Usually once a week and usually farmers gathered at one place to sell their produces. Other merchants also gathered to take advantage of the crowd in selling their products.
In Rwanda, they have the same market days. They are held every once or twice a week. These market days are lifelines for many poor people. If it rains on the market day, many people cannot even buy food, let alone make their loan payment. Many sell food stuff, such as fruits and vegetables. Some sell other stuff, like cooking oil, but rare. So many compete for the same customers and thus price ends up coming down. I strongly feel that we need to help them with more micro business ideas. It is the issue of micro enterprise development or MED and I intend to develop alliances with organizations and ministries from the second half of this year to expand the business options for the underprivileged.
Many bring their items in baskets on their heads. They can carry a lot over a long distance without having to hold the basket. It is an amazing act of balance. Some bring their stuff on their bicycles. Bicycles are an important transportation means to Rwandans, but they cannot ride up the hills that are so common in Rwanda. Please know that Rwanda is called a "land of thousand hills." So they often have to push the bicycles fully loaded with stuff up the hills for hours.
On one market day, I saw a barber cutting hair for people. You know Africans usually don't have long hair. And, their hair styles are pretty much the same. Shaved. Boys and girls, or man and woman, or young and old. They all have pretty much the same hairstyles. Initially, I was wondering how I could distinguish among them since they all have the same color skins and the same hair styles. But amazingly, I find myself be able to distinguish among them without too much difficulty these days. Their head shapes, their faces, their heights, their skin colors (that is right! there are many colors in black), their skin tones, their noses, their eyes, their lips, their smiles, their body shapes, etc... It is the same with any Asians or White people or "Muzungus" as they call them.
Oh what a finding you may say... but it was an enlightening experience. I remember that many Caucasians or African Americans were saying all Asians look alike. But they soon start distinguishing among Asians. I had a great argument on this issue with them, but now I am on the same boat doing exactly the same thing.
At any rate, the market day is a day of excitement, ancient or contemporary, west or east, and north or south. The same is true in Africa. It is a nostalgic experience. - Jeffrey
Posted by jlee80111 at 6:14 PM

Jeffrey:
Trying to contact you. How are you, brother? Brad Strait bstrait@soutfellowship.org