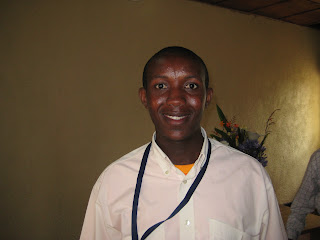 Today I visited the bank's Gicumbi Office in the Northern Region and met with 9 loan officers, one loan officer supervisor and the regional manager. After I shared my story with them and I listened to each and every one of them about their lives and the transformation stories they have seen. Most of them are moving stories, but here is one that touched me most:
Here is Jean Baptist's story.
Jean is a young man. He was born again only a few years ago. He joined UOB in 2007 as a temporary helper and became a loan officer in 2008. Fairly new. He was assigned to Gatsibo where muslims are dominant. On the first day of his visit, he prayed for God's guide since he did not know anyone in the village.
As he entered the village, he met a lady, namely Asnat, who was struggling with Gatsibo's muslim leadership on the charges she was getting for attending a Christian wedding. The charge was said to be worse than eating pork and the penalty was to be beaten to near death. Of course, it is only a threat since they cannot beat her up for a religious reason under the Rwandan law. Jean comforted her and calmly talked about the love of Christ that is deeper than the ocean. She listened to Jean and showed interest. A quiet beginning, but God's providence, it was.
This led Jean to being introduced to Asnat's friends and more people in the town.  One group was soon formed with 35 people. This led to another group and another group and so on. Now he is serving 340 or so clients through 9 community banking groups. Plus, 2 more groups are being formed. In about one year! I am oversimplifying the story, but what an amazing story!
I was so touched and moved by his story that I ended up bursting into tears when I was praying for them at the end of an almost three-hour meeting. I was so overjoyed by Jean's and many others' sacrificial service for the poor, for the lost and for the Kingdom. I thanked God for them and I thanked God for the opportunity to work with them. All I could say to Jean was "Take heart! Our Lord has overcome the world and He has already won the war. Keep up the good work!"
If this is not mission, what is?
If this is not life-style evangelism, what is?
If it is not holistic and integral mission, what is?
On the way back, I kept praying for Jean and all others who are in the field offices for their good works with which God will be pleased. - Jeffrey
Posted by jlee80111 at 10:28 PM