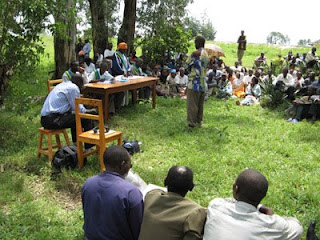 Gacaca (pronounced as Ga-cha-cha) is a traditional dispute resolution system in Rwanda. Since the genocide 1994, the Rwandan government has struggled to administer justice to hundreds of thousands of genocide suspects. A UN court was set up in Tanzania to try high level suspects. The regular Rwandan courts began processing the rest. But they were soon overwhelmed. So the government adopted a traditional form of dispute resolution into a grassroots apparatus for trying genocide cases. It has been a legal experiment, mostly successful but here and there injustice and side effects exist.
I have a case right at the bank. One of the directors, who is a Hutu, has been tried at Gacaca for many years. Last year, he was found not guilty and he thought it was the end of the fiasco. This year, however, he was tried again and was charged to the second degree that is a pretty serious charge. He chose to flee the country and sent in his resignation via e-mail. He explained in his long e-mail that he did not kill anybody and rather hid a lot of Tutsis in his house.
I do not know the truth whether he was involved in the genocide or not, let alone whether he killed people or not. The fact of the matter is that he had to give up everything, his job, his family, his property, to save his life. He was asking for help... and I did not know what to do... except prayer. He is 60 years old and I am not sure how he will be able to live overseas as a fugitive.
I do not know why the genocide had to happen in such a horrible way. But, I have to believe that God is able to turn the human's evil intent and acts into His goodness. Obviously the genocide was acts of the devil and all the international community turned their back against it. Sad. But it is the reality.
God, I am so glad that you are the only truth. May your mercy be upon him as he tries to find a life as a fugitive. Not knowing the truth, all I can do is seeking your mercy. Oh, Lord... Be merciful. - Jeffrey
Posted by jlee80111 at 2:46 PM