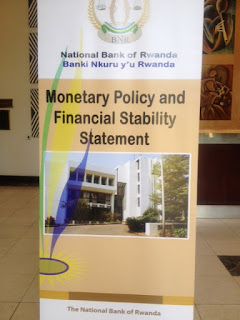 Rwanda's central bank is Rwanda National Bank or BNR in French. It holds monetary policy statement meeting twice a year. The first one takes place in February. I have been attending all of them for the past four years, including this past one.

At any rate, he is a highly intellectual governor. Every time he is presenting, he does not lose the control of the flow of his presentation. He is a great communicator.

Not only his style is impressive but also Rwanda's economic growth and overall monetary policy have produced steady GDP growth (mid 7%), FX rates (2-4% devaluation a year) and inflation (mid 5-6%). This performance is exceptional. Moreover, all sectors in the financial services industry are showing positive signs. ePayment system continues to improve. He even mentioned the mVISA, VISA's mobile banking platform and ackowledged that Bank of Kigali and Urwego Opportunity Bank will first join this interoperable mobile banking solutions. Card solutions and branch network also continue to improve.

Some people asked cynical questions, such as "So Rwanda has no challenges?" He aptly replied with a list of challenges that the BNR still has to manage, including regional uncertainty, global financial crisis, oil prices that can have significant impact on a small economy like Rwanda. .

Out of eight monetary policy statement meetings that I have attended so far, none has disappointed me so far.

May the stable and steady economic growth continue in Rwanda at least in the foreseeable future. - Jeffrey
Posted by jlee80111 at 10:34 PM