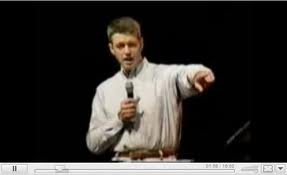 For it is by grace you have been saved, through faith - and this not from yourselves, it is the gift of God (Ephesians 2:8)
It is so true that we are saved by His grace and through our faith.
But, genuine faith is evident in his or her life. In other words, faith that does not show its evidence in his or her life may not be genuine. I am not trying to be judgmental, but I will have a reason to ask why.
I have watched this video clip of Paul Washer's message that is hitting the nail right on its head. He spoke this shockingly biblical message to youth in 2002 and his message carries a clear truth to many Christians to date.
Here is Paul's bio.
Paul Washer became a believer while studying at the University of Texas. He completed his undergraduate studies and enrolled at Southwestern Theological Seminary, where he received his Master of Divinity degree. After graduating, he moved to Peru and served there as a missionary.
Paul ministered as a missionary in Peru for 10 years, during which time he founded the HeartCry Missionary Society to support Peruvian church planters. HeartCry's work now supports over 100 indigenous missionaries in over 20 countries throughout Eastern Europe, South America, Africa, Asia, and the Middle East.

Paul now serves as one of the laborers with the HeartCry Missionary Society (www.heartcrymissionary.com). He and his wife Charo have three children: Ian, Evan, and Rowan.
I pray that you will be challenged and blessed by this message. There are three clips on youtube, which make up the message. - Jeffrey
http://www.google.rw/url?url=http://www.youtube.com/watch%3Fv%3DuuabITeO4l8&rct=j&sa=X&ei=vCcPTufUBM2XOpq5yLQL&ved=0CFMQuAIwCg&q=paul+washer&usg=AFQjCNF1wOf2-WzMuV8zXbziWrn2HSDqNw
Posted by jlee80111 at 5:42 AM