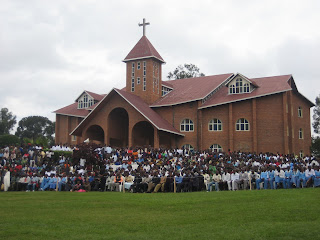 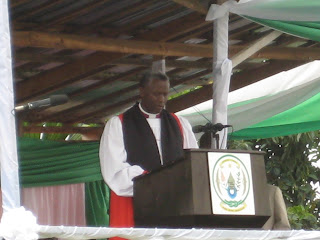 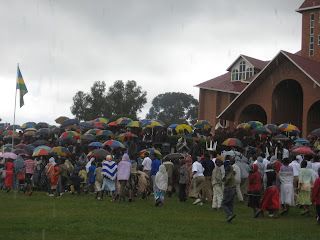 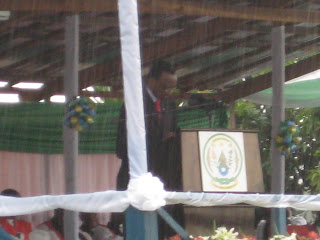 [St. John Cathedral that Bishop Rucyahana built (Top Left)... Bishop Mbanda delivering speech after the consecration (Top Right) ..... President Kagame delivering speech in the heavy rain (Bottom Left) .... People participating in the ceremony even in the rain (Bottom Right)]
On March 28th, Sunday, Rev. Dr. Larent Mbanda has been consecrated as the Bishop of Shyira Diocese in northern Rwanda, to succeed Bishop John Rucyahana who is retiring this year.
Kristin and I, having been invited by the new Bishop Mbanda couple to attend the consecration ceremony, left home at 6AM and drove to Ruhengeri for two hours. We were advised to arrive by 8AM. The ceremony began at 9AM and lasted for almost 6 hours!!! A lot of praises, a lot of speeches and a lot of ceremonial programs filled the event.
What amazed me was that the President of Rwanda, Paul Kagame attended the ceremony and sat through for over 3 hours. It was very unusual for the President to attend a private function for such a long time. But, considering that Bishop Rucyahana is a member of PAC (President's Advisory Counsil) and has been helping Rwanda exposed to the world greatly, his attendance was understandable.
Heavy rain started from 1:30PM and lasted until the ceremony was over, close to 3PM. Nonetheless, the ceremony continued and people kept sitting and standing until the end.
Bishop Rucyahana is an amazing enterpreneur as well as an inspiring spiritual leader. Whoever is listening to him will sense the pulse from him and be motivated to do what he is suggesting. He wrote a book titled "The Bishop of Rwanda." It was foreworded by Pastor Rick Warren.
Ministry-wise, he has, since he was elected as the Bishop of Shyira in 1977, helped not only grow his own Diocese Shyira but also found 140 plus churches in the U.S. under the leadership of the Province of Rwanda. Amazing...
Enterprise-wise, he established Sonrise School initially for the orphans. Now it is one of the top schools in the nation where even wealthy and non-Christian people want to send their children for high quality education at Sonrise. He also helped Opportunity International come to Rwanda and invest in microfinance, resulting in now UOB. He is a member of the UOB's board. He also started a hotel to help build the tourism industry for Rwanda. He has been involved in prison ministry, healing and reconciliation ministry, evangelical crusade ministry, education ministry. In whatever he has been involved, he has done a marvelous job. His heart is always beating to help bring Rwanda to become a better and exemplary country in Africa. I am certain he will play a bigger and more important role after he retires from the Diocese.
New Bishop Mbanda is an impressive servant of God. He is still Vice President of Compassion International's Africa Region, but will hand it over to a Kenyan successor in a couple of months. Also, he founded and has been leading Christian African Leadership Ministry or CALM since 1990 when he was studying in the U.S. Prior to joining Compassion in 1993, he had been in various capacities with several ministries, such as Country Director for Campus Crusade for Christ in Burundi and Africa Director for Christian Aid Mission.
He studied at a Bible College, received a master's degree in missiology from Fuller Seminary in Pasadena, received a master's degree in Christian Education from the Denver Seminary, and received a doctorate degree from Trinity International University in Deerfield, IL.
His wife, Chantal is Director of New Hope Homes that is a family-style orphan care ministry with three family homes at present. Kristin is involved in this ministry.
It was a very long six-hour ceremony, but it was worthwhile to experience the culture and to witness how seriously people are taking the bishop consecration. When we arrived back to Kigali, it was 6PM. It was a 12-hour journey since we left home in the morning and it was even not counting the reception that we decided to skip. Whew.... - Jeffrey
Posted by jlee80111 at 7:50 PM