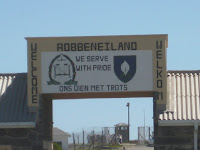 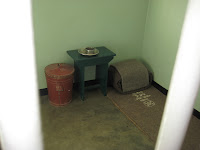 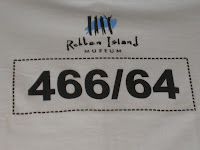 There was an Opportunity International Africa CEO Conference in Cape Town during October 19-21. Kristin and I took Friday off and spent two days in Cape Town.

One of the first things we did was visiting The Robbene Island where the maximum security prison was located. South Africa's former president and a Nobel Peace Prize winner Nelson Mandela spent 18 years at this maximum security prison doing hard labor. His prison life was because of the "Apartheid" that was prevailing in South Africa until 1994.
Anyone who is a South African or interested in Nelson Mandela knows what "466/64" means. It is the identity number for Nelson Mandela. His prison cell was in Section B Cell 7.
A small island, Robben Island, located approximately one hour by ship had many former political prisoners. Now it is closed, but it remains the World's Heritage Site, showing the cruel human mistake of "Apartheid." Our tour guide was a former political prisoner who spent 8 years at this Robben Island. I prayed that such a cruel human mistake like "Apartheid" should never happen again. - Jeffrey
Posted by jlee80111 at 6:22 AM