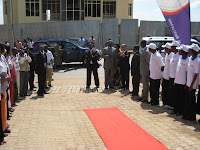 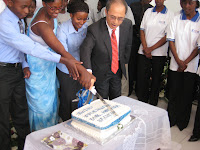 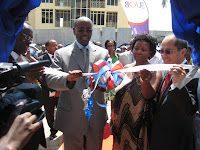 On Friday, June 12th, the Muhanga Branch was opened. The tape-cutting was done together by the Rwandan Minister of Finance, the Governor of Southern Province and the Mayor of Muhanga District. Normally, these government officials would not be attending a bank branch opening, but they were in the Muhanga District to celebrate the Southern Province's "Tax Payors Day." Our branch opening was part of the government program.

Our own ceremony was cut short because I had to attend the official ceremony and celebration that was held at the regional stadium. But we prayed to the Lord before the tape cutting ceremony and praised Him for His gracious provision. More than a dozen clients also attended and celebrated the opening together. It was a blessing! 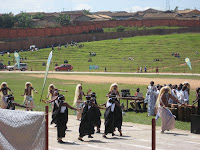 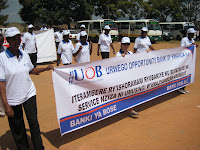 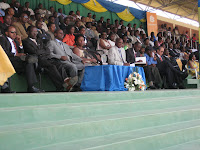 The Muhanga Branch is the second rural branch that we have opened in 2009. At this location, the deposit branch and credit office are located together. Thus, it will house five branch stff and 10 credit staff. It is an important and strategic location. Moreover, it will als serve the needs of Karongi New Market Office and possibly of the Nyanza EBU (four offices).

Muhanga, formerly known as Gitarama, is a strategic city that connects all transportation roads from the east (Kigali) to the west (Karongi or f.k.a. Kibuye) and from the south (Huye or f.k.a. Butare) to the north (Ruvabu or f.k.a. Gisenyi). You can easily notice much construction work is under way.

The formal celebration at the stadium last for two and half hours. Being seated at the front row with the dignitories, I could not do much but sit there without understanding much of what was going on because all programs were conducted in Kinyarwanda. I was the only non-Rwandan or perhaps non-African, except a couple of summer interns from the U.S.
It was my first time to attend the formal ceremony and also the first time to watch the Rwandan traditional "Intore" (lion) dance. The dance had a lot of rythmes, but the movements looked rather simple. Young men, the chosen ones, were raised to be special warriors in the past and only the chosen ones were allowed to particiate in the dance. They wear long golden hats, symbolizing the male lion's neck hair.
Our bank staff also participated in the parade wearing the same shirts and caps.
I was grateful for the new bank branch that will help serve the most vulnerable in the Muhanga area more effectively.
One of the two big differences that UOB has with other institutions is that we reach out to the clients in the villages many times on motorcycles, rather than they come to the bank. This creates substantial burden on the bank financially, but it is the right thing to do. It is more incarnational than otherwise.
The other difference is that UOB is the only institution that uses the biometrix technology. When a client opens an account, we take the picture and the fingerprint. When a customer wants to do a teller transaction, he/she puts his/her fingerprint on a device and the system will load up the picture of the client to ID him/her immediately. The transaction processing time is less than one minute. The clients love it and so do the government people. The government emphasizes so much on "customer care" and this is a great example that they use in promoting innovative way to improve the "customer care."

I had to hurry back to the Kigali home office to sign and submit a proposal in time, so I missed the fellowship opportunity. But it was a great encouragement to work with those who share the same faith and eternal life. Praise the Lord! - Jeffrey
Posted by jlee80111 at 6:37 PM

Another impressive news! Congratulations on the opening of the Muhanga Branch. Without a doubt, your management will have outstanding results.

Also congratulation on Amanda's wedding. I wish the new couple much happiness and love in their life together.

Last Saturday, over a hundred people attended a golf outing in JC Melrose, owned by Mr. Chung. Its success was due to the strong foundation you had laid in the Shinhan Society. I wish you continued luck and success in your good works.

Dear Mr. Yoon, thank you for leaving the encouraging comments and good news about the Shinhan Society golf outing.I am very happy to have been part of Shinhan and its clients. Best regards, JJL

Hi,
this is testing.