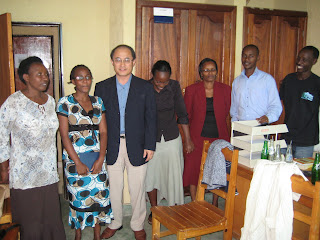 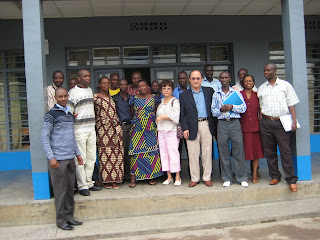 [<= Musanze Office staff => Gisenyi Office staff]
On April 1, we traveled to the north, Musanze, where Virunga National Park is located. In this National Park, people trek to see the rare mountain gorillas. There are volcanoes, some of which are dormant. Then, we further traveled to Gisenyi, the northern tip of the Lake Kivu and very close to the DR Congo border. This time, my wife Kristin traveled toghether.
On the way to Ruhengeri, the capital of Musanze District, the roads had a lot of pot holes. It was probably the worst main road that we have traveled so far. If Musanze is one of the main travel attractions, the government should make extra efforts to improve the main road, I felt. The road was pretty winding, but not as bad as the one to Karongi. It took us still approximately two hours to get there. One amazing scenery about Rwandan agriculture is that people have cultivated all pieces of land even up to the top of the mountains and hills. I wonder how they physically plow the soil on such steep slopes.
In the Musanze Office, there are one Loan Officer Supervisor and nine loan officers. As usual, I introduced myself and met them individually by listening to them. After I shared with them the vision for the bank's future and listened to their issues, transformation stories and suggestions. Many of them are pretty similar, but I was hoping to catch something new. I continue to take notes and collect all feedback until all my tour is over. After all tours, I intend to summarize them and take corrective actions collectively, particularly on those of common themes.
We traveled further to Gisenyi for another one hour and fifteen minutes. There was a road expansion construction under way so we had to stop a couple of times to wait for the opposite traffice to pass by on one way road sections. Gisenyi is right at the border with DR Congo. The closest town of DR Congo is Goma. Until recently, there were battles going on between the joint forces of DR Congo's government troops and Rwandan army, and the DR Congo's rebels. It ended up with a victory for the joint forces, but a lot of refugees resulted from the conflict. The Gisenyi had some nice hotels, including Serena Lake Kivu right at the beach.
The bank's Gisenyi Office has only three staff members, one supervisor and two lenders. It is a small operation and I felt strongly that we either have to expand our presence or to withdraw. There is no economy of scale and no significant impact on the target client base. After discussion, I felt that the market still has potential for growth and the need for microfinance is growing, particularly now the military battle is over. We have decided to strategize further.
The scenery was beautiful and I felt like sitting down at the beach to have some reflection time, but we had to hurry to get back to Kigali not to be too late. We had to travel for another three and half hours. As expected, the road condition was pretty bad and my butt was hurting, but my heart was content with meeting my colleagues serving the poor all over Rwanda.
Lord, please grant me your divine wisdom so that I may make right judgment on many situations. It is my desire that this ministry may move to the next step in tune with your will and in step with the Holy Spirit. Oh, Lord, may I seek your guidance in every step of the way... - Jeffrey
Posted by jlee80111 at 9:43 AM