Thus, UOB established its own UOB T-Awards in July 2013. T stands for Transformation. These awards have four categories: Economic, Social, Spiritual and Holistic.

All business units submit their applications for these awards based on their client stories. Then, senior leaders will be randomly assigned to visit and interview these clients to validate the submitted stories and also to learn more about the clients. Through these interviews, home office staff and senior leadership members can experience the transformation impact stories firsthand. So the transformation impacts are also on staff.

All senior leaders who participated in the interview process present their client stories to the group, and through discussion and debates, four winners are selected each for four categories. The selected clients receive cash prizes of Rwf50,000 for economic, social and spiritual and Rwf80,000 for holistic T-award recipients. The business units that submitted the applications also receive the same amount of cash prizes to acknowledge and appreciate their efforts.

These clients are invited to UOB Day and after the praise and message, their stories are shared with the entire staff and prizes are given to them with UOB T-Award plaques.

For January 2014, their stories are summarized below: 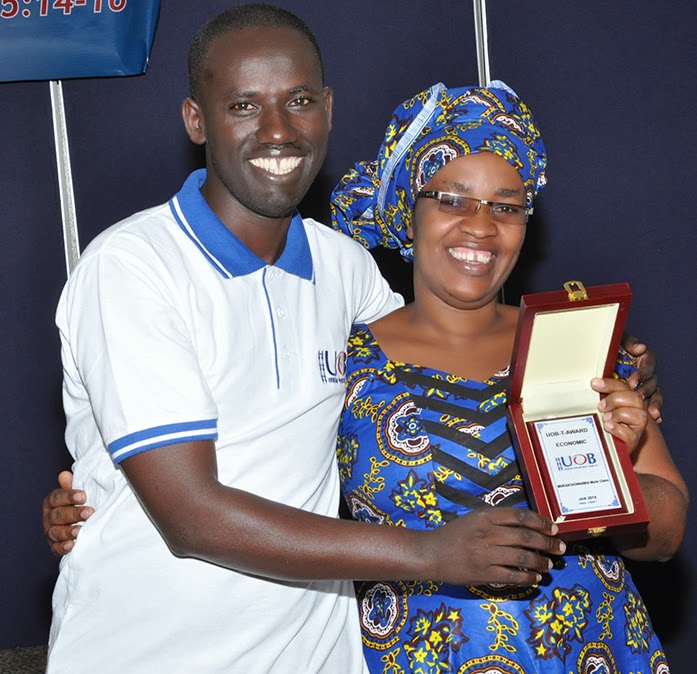 UOB Economic T-Award: Marie Claire Mukantagwabira served by Kigali East EBU
Marie Claire started borrowing Rwf30,000 (USD45) from UOB only five years ago and is now borrowing Rwf15Mn (USD22,400). When she first joined UOB, she had only a sambusa (triangle-shaped deep fried food) business, but now has two supermarkets, one gift shop, one spare part shop and one restaurant. She now employs 13 workers. Marie Claire has a plan to expand her business even further to own a bakery, juice factory and wholesale business. When all are completed, she will employ up to 50 people.

It is an impressive story of tremendous economic success accomplished just over five years. Through the process of expanding her business, she has purchased a house and a car, and has been able to send her children to school. She deserves to receive the Economic T-Award. 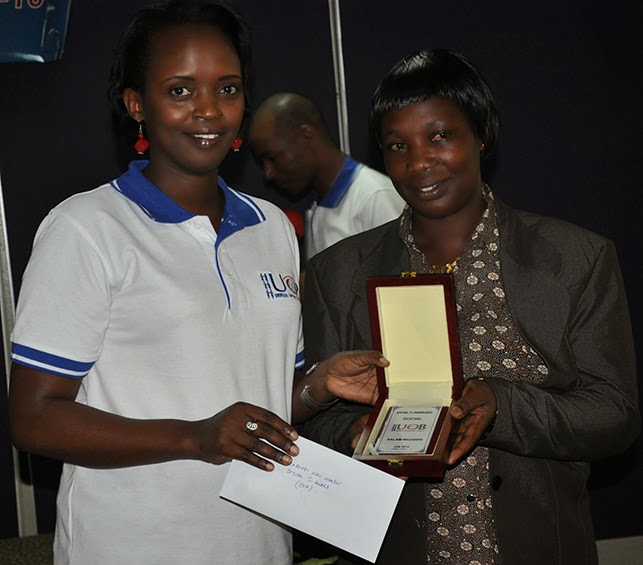 UOB Social T-Award: Salam Ingabire served by Karongi EBU
Salam owns a restaurant. His relationship began in 2009 with the first loan of Rwf15,000. He is now taking Rwf600,000 and she is now the leader of the trust group she belong to. When she started her relationship with UOB just four years ago, she was renting a small room for Rwf3,000 a month. Now she owns her own house, one cow, a sizable banana plantation and a good restaurant business. She is paying for school fees for three children.

Social T-Award was given to her for two reasons. One was that she came back from DR Congo and had to start from scratch with nothing. Extreme poverty degrades humanity but over a short period of time, she was able to gain the respect from the local community and to make significant contribution to the community. She organizes the Women's Day for the village, coaches other women in doing business, provides a room for the women meetings and also leads the trust group as president. Also, she offers her restaurant as the gathering place for the group. The second reason is her proven ability to share her faith despite her family's roots in Islam. As her name indicates, she is part of a Muslim family, but she is a believer and she is able to talk about Jesus and her faith in her family based on her economic achievement. She attributes her success to God's blessing and her faith has grown over time. We definitely want to see more stories like Salam's. 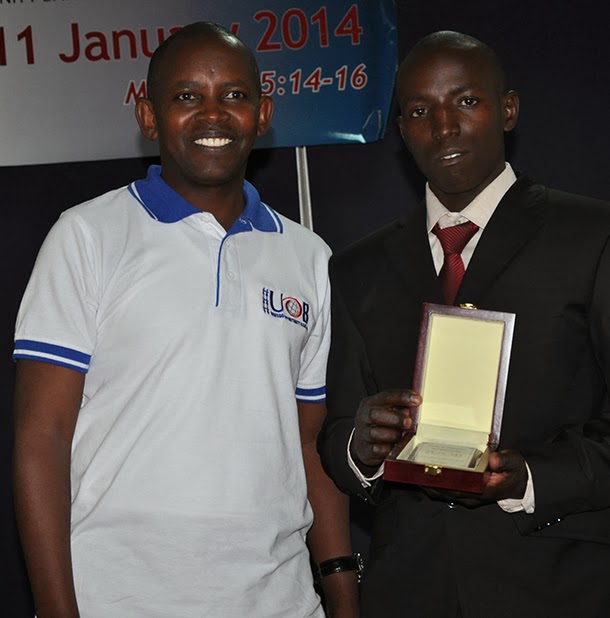 UOB Spiritual T-Award: Eric Hategekimana served by Gicumbi EBU
Eric owns a bakery. He has been raised by a single mom and he studied up to only primary 4. He had to leave the school because his mom could not afford the school fees. He married to his wife who also dropped the school after senior 3.

Eric joined UOB's trust group in 2007 and received his first loan of Rwf50,000 and started expanding his business. Initially he did not have any capital so he was using beans grown in his own garden. But with the loan, he was able to buy baking equipment and expand the business lines. He owns his own house, a plot of land, two motor cycles. He now employs 10 people five of whom are staying at Eric and three of whom have been married. Now he borrows Rwf1,500,000 and is able to pay without any past due. Eric is also active in serving the community as a civic servant. Eric is also proud of being able to send his wife back to the secondary school to finish her study, rather than seeking his own study. He plans to send her to college.

Spiritual T-Award was given to Eric for three reasons: One, Eric used to be a Roman Catholic but now fellowships at ADEPR, a Pentecostal denomination in Rwanda, based on his conviction of the Christian teaching he has received from UOB staff. Two, Eric has been attending church services three times a week and has been taking care of many visitors to the church by offering his residence. Three, he has been practicing Good Samaritan spirit by helping several neighbors with the love of Christ, such as paying for medical bills who could not afford to pay, paying for wedding expenses for his three staff and paying school fees for two orphans in his village.  May God bless Eric and his family to be a greater blessing to many others in Christ's name. 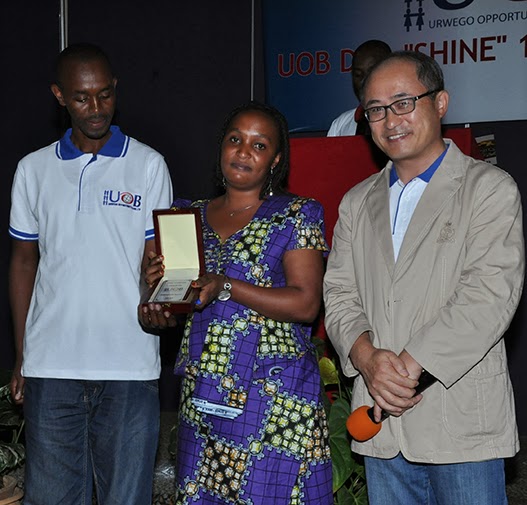 UOB Holistic T-Award:  Aplphie Nyirabaziga served by Rwamagana EBU
Apophie was the first one who received the most highly recognized Holistic T-Award. She joined UOB's trust group in 2009 with a Rwf50,000 loan. She is now borrowing Rwf1.2 Mn. When she joined a UOB trust group, she was in the cowhide business, but now she runs an auto spare parts business. She employs two permanent staff and eight temporary staff.

The Holistic T-Award was given to Apophie because her transformation was well balanced in all three aspects of her life. Economically, she has been able to grow her working capital from Rwf300,000 to Rwf2.5 Mn., to buy two cows, a forest, a banana plantation and a water tank for her family. Socially, she has played several important roles in serving her community, such as the president of her trust group, a member of the local sanitation board, a member of savings SACCO at the sector level and a woman representative at the local cell level. Spiritually, she has transformed from a church goer to a committed member of a local church, now as an elder of the church. Because of her faith, her husband has been converted from Islam to Christianity. Also, she has adopted three orphans and takes care of them. All these exhibit a wonderful example of holistic transformation that has taken place in her life. May the good Lord produce holistic transformation in more lives in Rwanda, like Apophie!

I am so blessed to witness these transformation stories first hand along with my colleagues. May the Lord bless them to continue the transformation in their lives to be a blessing to others around them! - Jeffrey
Posted by jlee80111 at 4:55 PM