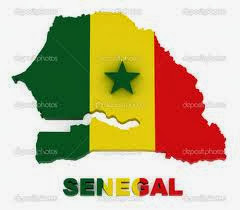 Kristin and I traveled to Senegal in December 2013. The primary purpose was to see Joyce who is serving as Peace Corps volunteer based in Thies, the third largest city in Senegal.

Senegal is in West Africa. Its land is 197,000 sq. km. and its population is approximately 13 million. Senegal has another country squeezed into it, namely The Gambia.

The visit to the Monument of African Renaissance was quite an experience. It is the tallest statue in the world and it cost the country $27 million. This statue of a father holding his wife and holding up their baby pointing to a bright future, leaving behind the tragic past history of colonization and slavery. Ironically, the mother's skirt was completely untraditional to Senegalese culture and far too short, thus becoming very scandalous. Moreover, their faces were not like Senegalese. Another observation that I made was the baby was pointing to the direction to North Korea, while the guide was explaining that the baby was pointing at America. American was in their back. No wonder it is scandalous. 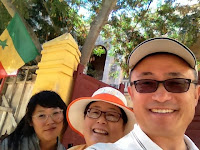 The lunch at Ngor Beach was gorgeous. The food was excellent but we enjoyed the soothing sounds of ocean waves more than the food. The restaurant's decorations were quite interesting.

We then traveled to a small beach town called Popenguine probably with a population of one thousand. But the beach was stunning and people were so friendly. We stayed two nights at a guess house called Enebe that had four rooms in a cute and cozy setting. We thoroughly enjoyed the ambiance and the hospitality of the guest house.

Joyce and I climbed to the top of the cliff by the beach and on the way down we saw a beautiful sunset.

The restaurant by the beach was a fantastic experience. The setting was beautiful and the ambiance was a dream with the soothing sounds of breaking ocean waves. We had a lunch on Christmas Eve and it would be an unforgettable memory.

On Christmas Day, we traveled to a more touristic town called Sally. Joyce wanted to experience the sauna and facial treatment at an award-winning hotel and spa, called Rhino Resort Hotel and Spa. It was a five-star hotel, but it was obvious that they over-advertised themselves. On the way there we saw a numerous bill boards, but the actual place was not so grand nor luxurious. Kristin and Joyce had experiences at the spa, while I was enjoying my solitude moments without disruption. The lunch was far better than the hotel experience itself.

Joyce and I learned about how to play a card game, called PK, and we enjoyed playing games for three nights.

After Popenguine, we traveled to Thiess where Joyce is living and working. We stayed at a hotel called La Massa, supposedly one of the better hotels. We visited the family of the Ly. Madam Ly was Joyce's business counterpart. Joyce has been helping Madam Ly's jewelry business in market development, product design and accounting. The family invited us to lunch and we ate Senegalese traditional rice with chicken. The food was delicious but their family's hospitality was wonderfully warm and friendly. Madam Ly's husband was Samba Ly and he was a painter. They have nine children and three of them were artists. We saw some artworks and they were very unique and creative. The father Samba Ly gave us one of his oil paintings as a gift. A lovely family we enjoyed dearly.

We briefly visited Joyce's living place. A moderate place it was. I prayed for Joyce over there asking for God's special grace of protection and safety over the remaining four months or so period until she will have completed her service period with Peace Corps.

We also visited American Corner located at the Cultural Center. Joyce is teaching English once a week. Also, we stopped by Peace Corps Training Center where new Peace Corps volunteers must be trained for two months. It is the only one in West Africa.

The following day, we visited Ibu, a farmer, and his farm where Joyce is working on a chicken farm project. Ibu is a well respected community leader and also an exemplary farmer with several best practices of farming. He was growing many veggies with water dripping irrigation system. Joyce has just received approval to raise a funding to build a chicken house to be able to raise up to 500 chickens. Joyce hopes to finish the project before her tenure is over. Ibu was father of four children. We visited his house briefly. Ibu was a very warm and nice man, who was willing to help out his village people going beyond the boundary.

We headed off to the airport to catch the return flight to Kigali Rwanda. We used taxies several times, but Senegalese taxis were very close to junkies frequently with window shields severely cracked and the car seats were wildly torn. All taxis we rode had the odometers and speedometers out of order. It was a miracle that such cars were still running. Comparatively speaking, Rwandan taxis are fancy and luxurious limousines.

Both Kristin and I came back home safely with deep gratitude for the opportunity to see Joyce and spend time together over Christmas. For me, Senegal was the 12th country to visit in 2013. - Jeffrey
Posted by jlee80111 at 11:20 PM