Trip to Nyanza and Huye... 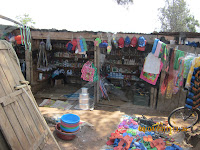 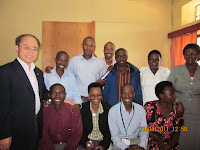 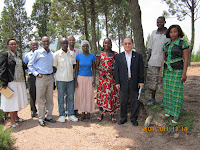 [With Huye EBU staff .................... With part of a client group ...................... A client's store ]
On Friday, March 4th, 2010, I visited Nyanza/Huye EBU (Entrepreneurial Business Unit). Huye is located in the southern province and the second largest city in Rwanda. It houses the national museum and is the home for National University of Rwanda, the largest and the best college in Rwanda. It is a 2 and a half hour drive from Kigali. This was the second scheduled visit to EBUs in 2011, after our visit to Karongi in February.
The purpose of the visit was to observe the progress being made with the EBU and discuss how we can scale up our outreach in the area where they serve the poor. Huye EBU is responsible for five (5) districts (Huye, Nyanza, Gisagara, Nyamagabe, Nyaruguru) out of 30 districts in the country. But currently the outreach is one of the smallest, serving approximately 2,500 clients only. The other side of the coin is, however, Huye EBU presents a tremendous potential to expand our outreach.
Huye EBU is a turnaround case. The PAR (portfolio at risk) was high and the client number was not growing at all. We had to change the leadership completely. The EBU leader and team leaders were all replaced, and lending staff were switched around with different client responsibilities. After the changes, I visited the Huye EBU in August 2010 to empower the new leadership. Six (6) months have since passed and I wanted to visit them again, to acknowledge the difference that has been made and to empower the leadership even more. PAR now stands at a minimal level and the client number started growing again. The team spirit was more apparent and their morale was higher than last year. They asked me follow up questions on new products that are currently under development, such as OpenSky, micro insurance, motor taxi loans. I was greatly encouraged by the change in their attitude. Our transformational impact was also increasing as more clients now receive our HLI (Holistic Life Improvement) training than last year and the number is growing further. We have a transformation officer resident at Huye EBU, who also covers Muhanga and Rusizi EBUs. We praised the good Lord!
I informed the staff that UOB is currently making a proposal for a significant amount of grant to an international development agency. If granted, this proposal would benefit Huye EBU most since the proposal will cover seven (7) districts which include all five for which Huye EBU is responsible. The proposal includes implementation of a proprietary mobile banking solution that will help outreach to even very poor people in remote areas, who cannot afford existing remittance services. I asked them to join me in praying for God's favor so that we may be able to accelerate our outreach to the very poor people in the area.
After the meeting with the staff, We visited a trust group led by a young lady, called Rachel, standing next to me in the photo. This group has 24 members and is in its 6th cycle. Unfortunately they were not all gathered by the time we arrived and we had to leave shortly because we had to come back to Kigali for other appointments. But we still had an opportunity to talk with several members, including Rachel. A few male members all showed a great interest in our new motor taxi loans. (Refer to the previous blog post.) We gave them a few procedural tips for them to follow. I prayed for God's grace, comfort, encouragement and empowerment for them. Rachel prayed with thanksgiving and for our safe journey back to Kigali.
On the way back, we stopped at one of the prospective clients in Nyanza, who is running a convenient store and a restaurant at a bust stop. He is also running a milk processing center where he collects milk from dairy farmers, boils, pasteurizes and sells it to stores or consumers. By the Rwandan standard, he was a significant entrepreneur, possibly outside our target clients. But, we found it an excellent indirect opportunity to empower dairy farmers in the surrounding area. Unfortunately, we could not spend too much time with him because of our time constraint, but we agreed to follow up soon.
May we experience God's favor on the grant proposal so that our outreach to this area may expand in His name! - Jeffrey