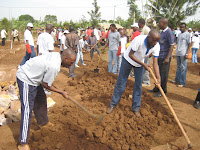 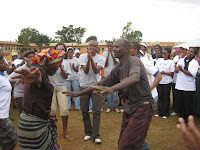 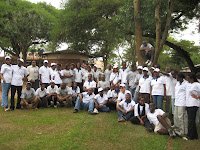 Umuganda is "community work" in Kinyarwanda. The last Saturday of each month is Umuganda. From 8AM to 11AM, all citizens of Rwanda are expected to participate in Umuganda. After the work, they gather together to hold a meeting to evaluate the work done and to acknowledge the participation.
Today, 57 members of UOB participated in the Umuganda in Rwamaga, Eastern Province. UOB has been operating in Rwamagana for the past 10 + years, but without a branch. We will open a regional branch next week. So it was a good opportunity to show UOB's support for the community.
Today's Umuganda was to help build classrooms for one of the primary schools in Rwamagana. We, meaning UOB staff and the local Umuganda participants estimated to be 300 in total, laid the foundation for three classrooms and made 400 cement blocks. The work involved digging, hoeing, shoveling, carrying cements and rocks, mixing cement and gravels. UOB also contributed 50 bags of cement that can produce 2,000 blocks.
The chief of the sector, called Executive Secretary, said that they will dedicate one classroom to UOB. We praised the Lord!
It was a great turnout for UOB and they all appreciated our participation. Without exception, there were people who were once prisoned, have been pardoned afterwards and are required to participate in the community work twice a week. Their participation helps them work together with the people of the community to which they belong. Most of them were involved in the genocide, normally suffering from the guilt and hatred. It is a great way of reintegrating them into the community.
At the end, they circled around and danced together their traditional dance to celebrate the work and to boost the morale.
Thank you, Lord, for the opportunity for us to work together through Umuganda! - Jeffrey
Posted by jlee80111 at 2:31 PM