Bank on the Wheels... Mobile Branch 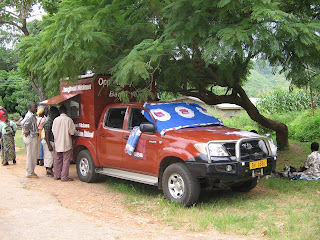 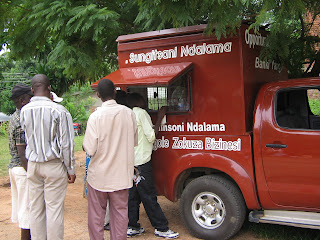 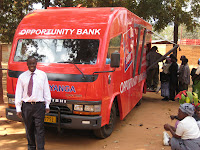 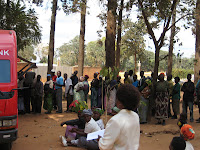 One of the primary purposes of my trip to Malawi was to study the Malawian bank's success story on mobile banking or the bank on the wheels.
The OI's Malawian bank or OIBM had two types of mobile branches and one type of cash pick-up truck. The mobile branches are equipped with ATM, teller windows, generator, bullet-proof glasses, and a cash safe. It is guarded by a couple of armed policemen while the mobile branch is in operation. I visited one town where the mobile branch was in operation and the customer line was long. I was told that they travel as much as 20 km from the remote villages. In the tree shade, micro lending activities take place while the mobile branch is taking deposits and giving out cash for withdrawal. At another corner, new deposit customers are waiting for their turn to open new accounts and receive their chip card that allows them to withdraw cash from ATMs and other PoS sites. It also functions as their ID card as it stores their information.
While the larger version was built on a bus frame, the smaller version was built on a Toyota truck frame. At the back of the truck, a canister is built to enable a couple of tellers to sit down and do transactions. It is a simple version of banking, but many village people have no access to banking without this type of branch facility. These mobile branches will go out to town and villages on their market days when people from neighboring villages are all gathering for trading activities.
We at UOB are planning to launch one or two mobile branches this year. I am already thrilled about envisioning the village people to be able to save their money safely, no matter how small it may be (frequently they start with one or two dollars), and to have access to credits that will enable and empower them to graduate from chronic poverty. Praise the Lord for having established success stories in creative outreach to the underserved! - Jeffrey
Posted by jlee80111 at 7:21 PM