On Thursday and Friday, May 7th and 8th, 2009, I traveled with a couple of staff to Rusizi, the farthest from Kigali. It normally takes 5-6 hours by car, depending on the weather condition in Nyungwe Forest, a rain forest which we had to pass through to get to Rusizi. (I will be writing about Nyungwe Forest later.) The lowest point is approximately 1,500 feet from the sea level and the height point is as high as 2,500 meters in the forest. It rained heavily in Kigali, but when we entered into the forest, the rain stopped. Because of earlier rain, however, the forest was pretty foggy and the driving condition was pretty challenging.
We experienced the Lord's grace of protection twice on the way to Rusizi.
The first was before we entered the forest. When we were passing through a village, an old man all of a sudden started crossing the street running without looking at all, about five meteres in front of our vehicle. Since there were many people on both sides of the road, there was no room to avoid hitting the old man. The only option was hitting the brake. With a long loud sqeaky noise, the car was brought to an abrupt stop. The car avoided hitting the old man barely barely. Thank God!
The second was in the forest. It is pretty dangerous to drive through the forest when it is raining. We prayed for a safe journey before we left, but we did not know how thoughtful and gracious He was until we got out of the forest. While we were in the forest, we did not have any rain other than fog. Right after we passed through the exit gate of the forest, however, it started raining. I mean pouring. We praise the Lord for answering our prayer!
Rusizi is a district located at the south western tip of Rwanda and at the southern tip of the Lake Kivu. Across the lake, there is a DR Congo's city, called Bavuga, a fairly large city looking from a distance.
There are two districts in this region: Rusizi and Nyamasheke. We have operations in both districts with three offices. Theodorsie and Eunice are the bank officers working with eight lending staff serving 2,500 clients. When I met them for the first time, I felt really good and assured of their strong and godly leadership. Eunice's husband is a bishop of a pentecostal church. I praised the Lord for allowing me to work with these wonderful people. 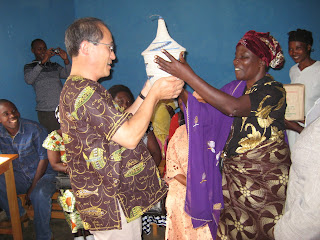 From early Friday morning, we had a series of meetings with our staff and two client groups. I was impressed first by the fine report that Theodorsie and Eunice put together. But I did not know how much more I will be impressed by our clients.

The first meeting with 15 clients has given us a little different experience than other areas of Rwanda. The people of Rusizi were pleasant, outgoing and pretty vocal about their needs and requests. We all had a good and productive meeting, with promises of taking care of some of their needs that have not been met. I offered to end the meeting with a prayer and I was asked to wait for a few minutes. About half of 15 people left the room and each came back in with a gift! I was stunned and got so embarrassed by the amount of gift they brought in and gave to us. They were fruit baskets, a bottle of juice in a gift box, tomato salsas contained in the Rwandan peace basket (I will write about peace basket later), a small picture frame, a letter of appreciation, tangerine orang 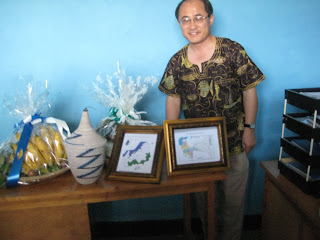 es wrapped in a box, etc. They all are from their gardens or their stores, but it was just an unbelievable and moving experience! We all gave thanks to the Lord and to them for their generous hospitality. I could not resist some tears in my eyes. This meeting was in the office located in Kamembe City.
The second meeting was at a deep village of Nyamirundi in the Nyamasheke District. The road to get to the village was really challenging. I have never ridden a car on any off-road like it. With a 4x4 vehicle, we could not go any faster than 10 km an hour. If it rains, no vehicle could dare to drive on it. It was a surprise, but the real surprise was when we arrived at a school building. All of a sudden, we were greeted by 40-50 people, mostly women, fully dressed up with colorful Rwandan dresses, singing w 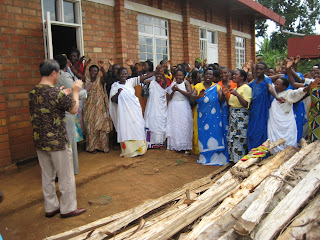 elcome songs waving their hands. I was asking Theodorsie what I was supposed to do. I was expecting a small group of people to talk with and to listen to. With 40-50 people, such conversation would be close to impossible, I thought. I was advised to act naturally and be responsive to their greeting. So I waved at them and hugged each and every one of them, as is the custom here in Rwanda rubbing cheeks three times as a sign of respect and hospitability.
When I went into the building, I was treated like a local authority. They all stood while I sat down. We started with a prayer, as usual, and three group representatives stood and read their speech and made their requests. I responded. Then they brought three peace baskets, full of dried isambasa (small fish caught in the Lake Kivu), peanuts and soy beans. While the gifts were presented to us, the ladies started dancing with arms stretched and mouths making interesting sounds that I remembered hearing in the African warrior movies. I was invited to dance with them and I could not refuse it. I ended up dancing with them. Fortunately I was wearing a Rwandan shirt that I got custom-made at the Kimironko Market. 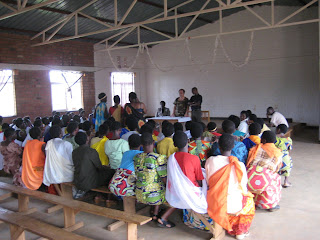 Several others shared their testomonials and also made requests. One of the ladies stood up and showed three passbooks. She said that with the first one she changed her roof, with the second one she bought a cow and with the third one she sent her children to school. "They all have been paid off!", she shouted. What an example of economic transformation! She was proud of and thankful to UOB. For me, I was proud of her and thankful to the Lord. 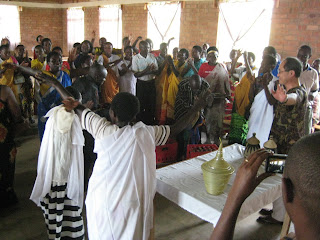 As we were leaving the place, they all came out singing and dancing, waving their hands again and inviting us back. Their hospitality was incredible and unforgettable. I do not recall any such welcome and greeting that I have ever received from anyone in my life.
The people of Rusizi are a little different from the rest of Rwanda, mainly because of their proximity to DR Congo. They are outgoing, pleasant and very generous. Rwandans are typically shy, reserved and introverts. Not in Rusizi. 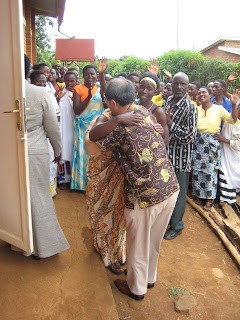 The return trip was rather smooth. All together, however, on Friday, we drove a total of 9 hours, including off-road driving. It was a long and tiring journey, but a wonderful one. Thank you, Lord, for the opportunity of working and serving these people of Rwanda. I thought I came to help, but I ended up receiving their generous hospitality. Love... is giving. They already know how to love others despite their poverty. May we learn and apply how to love others more in our lives... Amen. - Jeffrey
Posted by jlee80111 at 7:06 AM

we ourselves have had really bad experience on the road but to divine grace all those turned out without causalities then local friends told us that most of the old people that run on to roads are mostly deaf and partially blind and advised us to honk when ever driving on the highway through a town.