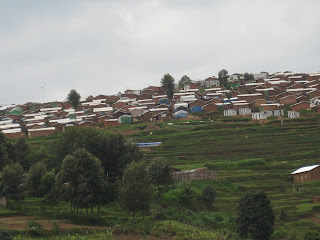 On the way to Gicumbi, a hilltop covered with white-roof houses came into my sight. I asked Daniel, a bank employee, what they were. Daniel said they are the refugee camp for the Congolese. Gicumbi is far into the inland of Rwanda from the Congolese border, approximately 200 km. It was a little surprise to find out that the refugee camp was established this deep into the country.
It was run by UNHCR, United Nations High Commissioner for Refugees, the U.N's refugee agency. They were transported by the UN trucks from the border. Of course, the UN feeds them, clothes them and shelter them.
While I was listening to Daniel's explanation, a flashback memory struck me. The Congolese civil war... that is closely related to Rwanda and the 1994 genocide.
The 1994 genocide was committed by the Hutu extremists to exterminate all Tutsis on a slogan to "cut the tall trees." Tutsis are generally tall and skinny. The Rwandan Freedom fighters based in Uganda then under the leadership of the current Rwandan President Paul Kagame came in to stop the genocide and pushed the militias to the jungle in the Congolese border area. The Hutu militias in DR Congo, the official name of Congo formerly known as Zaire, started using the refugee camps as the means to attract the international community's aids. The refugees were their shield and their prey. Not only were they using the refugees, but also were they killing the Congolese Tutsis living the DR Congo. The DR Congo's government was helpless and could not keep the Hutu militias at bay.
The Congolese Tutsis had to find a way to protect themselves. So, General Nkunda mobilized his own troops as rebels to fight against the Hutu militias trying to kill Tutsis, and naturally fighting against the weak and helpless Congo government. Since they were the rebels, the DR Congo's government wanted to put them under control but with no avail. The DR Congo government ended up hiring the Hutu militias to fight against the Congo's rebels. What an irony...
Rwanda's government got itself into a dilemma. On one hand, the Rwandan government felt the threat of the Hutu militias and wanted to protect the innocent Tutsis being killed for no reason. On the other hand, no matter how weak and helpless the Congo government was, it was still a legitimate government established by a democratic popular vote. For some time, the Rwandan government was believed to have supported the Congolese rebel forces led by General Nkunda and was being criticized by the international community.
About a month or so ago, however,  the Congolese rebel leader General Nkunda was arrested by the Rwandan troops at the border. Immediately after that, there was an announcement of joint operation between the Rwandan troops and the Congolese troops to destroy the bases of the Hutu militias as well as the rebel forces. It was a shocking news to everyone and the joint operation has been declared to be a great success recently. Nobody knows what has happened to General Nkunda, but many believe that he is probably enjoying his comfortable life somewhere in Rwanda. It is said to be an another military and diplomatic success that President Paul Kagame has achieved in Rwanda's foreign relations. He is a great strategist.
The Congolese refugee camp may soon disappear at least for a while. But the scars and wounds left in their hearts and minds will not soon disappear.  Indeed there is no peace treaty that has not been broken in the human history. There is no genuine peace without knowing and trusting the prince of peace, Jesus Christ. Amen. - Jeffrey
Posted by jlee80111 at 10:54 PM